The tragic assassination of Benazir Bhutto

In the final days of this year of 2007 the entire world witnessed the assassination of the charismatic Pakistani leader Benazir Bhutto.
In the news there was no clear reference to the time of the event. The only times we found are that of the confirmation of Bhutto’s death given by the BBC as 18:16 local time and Wikipedia refers 17:35 as the time she went into surgery at a nearby hospital. The earliest TV reports appeared a little after noon UT (17:00 Pakistan local time). If the event took place around that time, it makes perfect sense as Mars was rising, a clear indicator of a violent event. 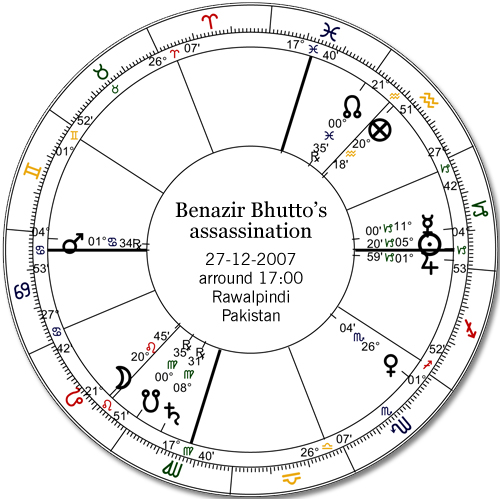 In this chart Mars is debilitated in Cancer describing a treacherous act of violence. The small malefic is afflicting Jupiter the ruler of the MC, and thus significator of authority figures and leaders. Jupiter is also combust which afflicts it even further.
The Sun itself, another symbol of leaders, is in the 7th House setting, which can also signify the fall of a leader.
The Moon, ruler of the Ascendant, is in the 3rd House of small travels. Indeed Bhutto was in transit (3rd House) in her campaign car when the assassination took place. In this house, the Moon is in her joy and she was in fact receiving cheers from a multitude of supporters.

Benazir Bhutto was born on the 21st June 1953 in the city of Karachi, Pakistan. Unfortunately the time of birth is unknown, so no chart can be erected. The only evident connection to the event chart is the close conjunction of transiting Mars to her natal Mars (at 4º49’ Cancer) and Sun (at 29º36’ Gemini), but without the Ascendant and the houses this information is rather vague and irrelevant.

Evidences of this tragic event must also be seen in the mundane charts for Pakistan.
As no visible eclipses or other phenomena have occurred in Pakistan in the last couple of months, we must look at the latest ingress chart, that of Capricorn.
The ingress occurred on the 22 December 2007 at 11:07:49 Pakistan time. The figure was cast for Islamabad, the country’s capital. 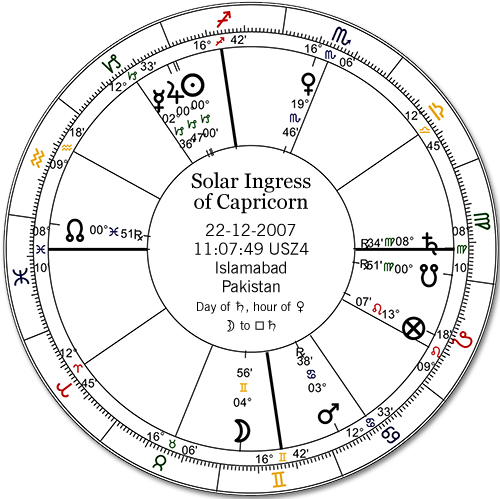 The most noticeable positions are the angularity of both malefics: Saturn is right on the cusp of the 7th House and Mars is on the 4th House. Again, the opposition of Mars to the Sun-Jupiter-Mercury conjunction is quite evident, an indicator of an act of violence. Jupiter, ruler of the Ascendant and the MC, is combust, which is another traditional indicator of danger to a leader. The triple conjunction is disposited by Saturn on the 7th House of enemies and ruler of the 12th House of secret enemies and conspirators.

As 2007 comes to an end is now the proper time for astrologers to make a comment about the upcoming year of 2008. So we inaugurate the astrological comments of the Academy’s blog with a brief view of the main configurations for 2008.

The most noticeable configuration of 2008 is the positioning of the two traditional cronocrators in Earth signs: Saturn in Virgo and Jupiter in Capricorn.
This is the first time both slow planets are both in Earth signs since the Jupiter-Saturn conjunction in May 2000, at 22º Taurus. The return to Earth will enhance this triplicity’s theme for the entire year: all things related to earthly resources, whether agricultural or mineral. Unfortunately, they are both debilitated, for Saturn is peregrine and Jupiter is in fall. There will be a melancholic tone to this year.

For this first winter trimester we are under the effects of the Capricorn Ingress of the 22 December 2007. As the planetary configuration itself is not very promising at this time, the first trimester will be a bit harsh and difficult.

For the European Union (EU) the ingress (cast for Brussels, the administrative capital) will have a Sagittarius Ascendant with the Sun-Jupiter-Mars opposition to Mars on the 1st and 7th Houses. 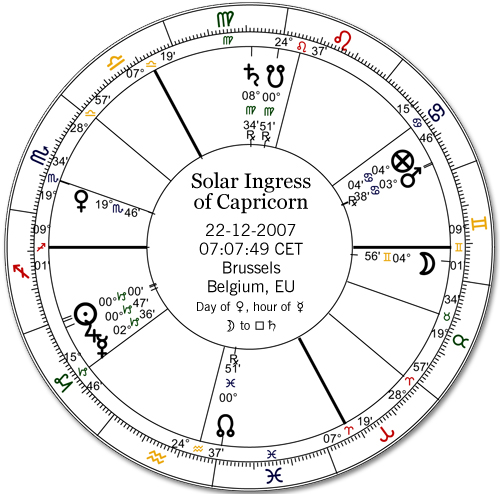 Although this opposition does not have too much angularity, it will bring discussion and quarrelling as Mars in the 7th (enemies) is afflicting Jupiter, the ruler of the Ascendant. The contention represented by Mars will probably relate to resources and economy as Mars rules 4th House, its conjunct the Part of Fortune and its also almuten of the 2nd House. The involvement of the 12th House also brings the subject of limitation and sabotage. The debilitated placement of Venus, ruler of MC (government) in this house indicates a weak government, much limited in its actions and of little consequence (Venus is feral).

There are various indications of foreign affairs interfering in the general condition of the EU. Note that Jupiter, ruler of the Ascendant is combust by the Sun, ruler of the 9th House, thus conditioned by foreign actions; furthermore Saturn, almuten of the MC is in this same house, conjoining the South Node.

It is also important to note the affliction of the Moon in Gemini by a square of Saturn, ruler of the 2nd House. The people (Moon) will face economical shortages (square of Saturn ruler of 2nd). So, as expected, this trimester is not very promising.

In the United States of America, the configuration falls in completely different set of houses. 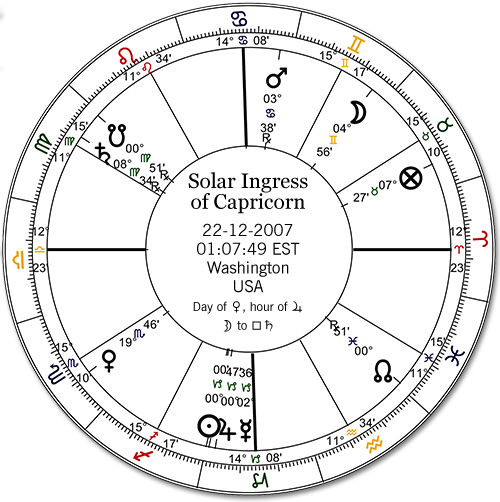 The most noticeable thing in this chart is a debilitated Venus, ruler of the Ascendant on 2nd House. This indicates a strong attention on the country’s economy, which will not be at its best. This weakness is emphasised by the fact that Venus also disposits the Part of Fortune. Furthermore the 2nd House is ruled by a debilitated Mars in the 9th House, which relates these economical difficulties to “martial” actions related to foreign issues.

The Sun-Jupiter-Mercury opposition to Mars which characterises this ingress fall on the 3rd and 9th Houses an indication trouble and contention in matters of media and communication, foreign affairs, education and travel. Although in cadent houses, this opposition falls in the culminating signs (10th and 4th signs from the Ascendant) which give it an extra strength.

Moon, ruler of MC and representing government is also debilitated in the 8th House. The Moon is squared by Saturn from the 12th House of hidden enemies. Saturn is the ruler 4th House of homeland, territory and natural resources, which are subjects that might be troublesome for the USA government in this trimester.

Indeed the configurations are not the best but today (31 of December) Mars will re-ingress the sign of Gemini, clearing a bit of the muddiness of its transit through Cancer and giving us a lighter New Years Eve celebration. Enjoy it while it lasts!